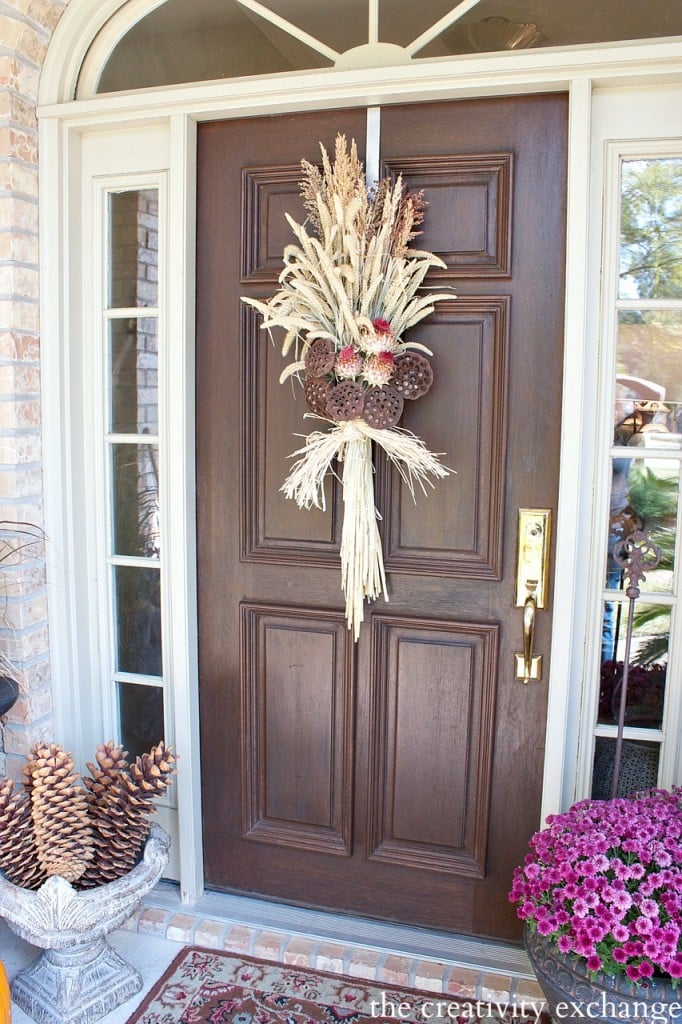 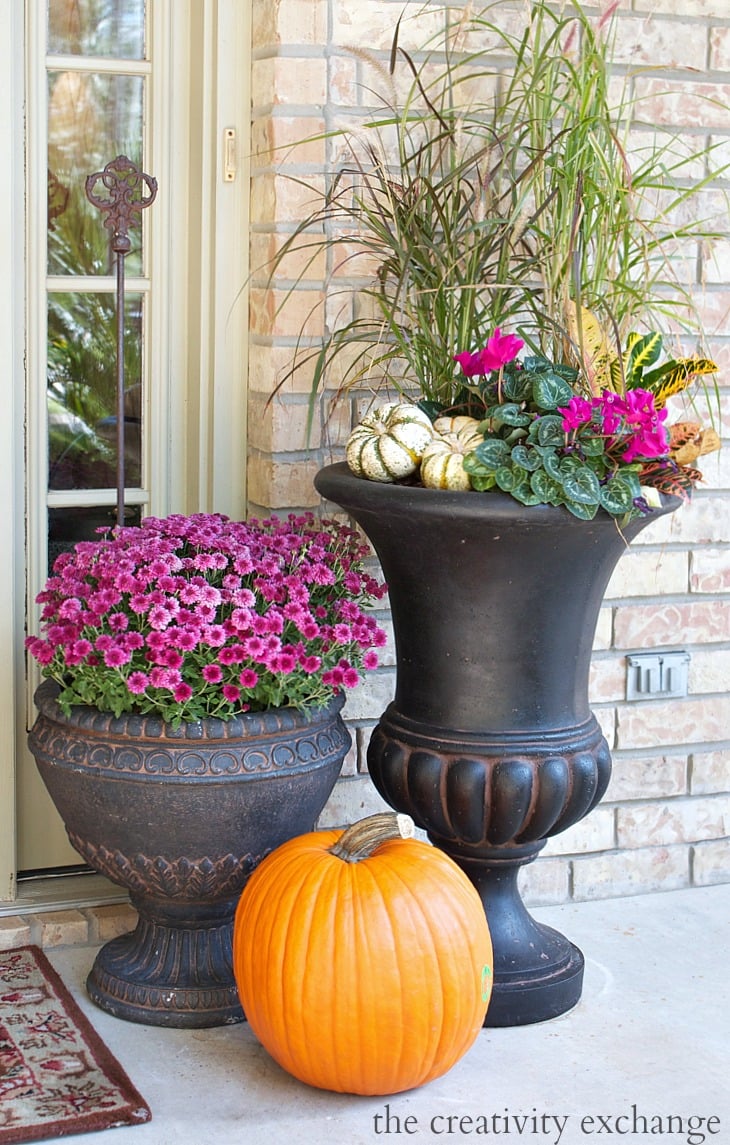 I haven’t done a whole lot of fall fluffing around the house yet because it’s still around 85-90 degrees here in East Texas (ugh!).  However, I did manage to fall fluff my front porch (say that 10 times fast).  I mixed in some grasses with fall plants in my large planters and mixed in pine cones and pumpkins.  I’m hoping that in a couple weeks, my grasses and plants will really grow tall and full (they look scrawny right now): 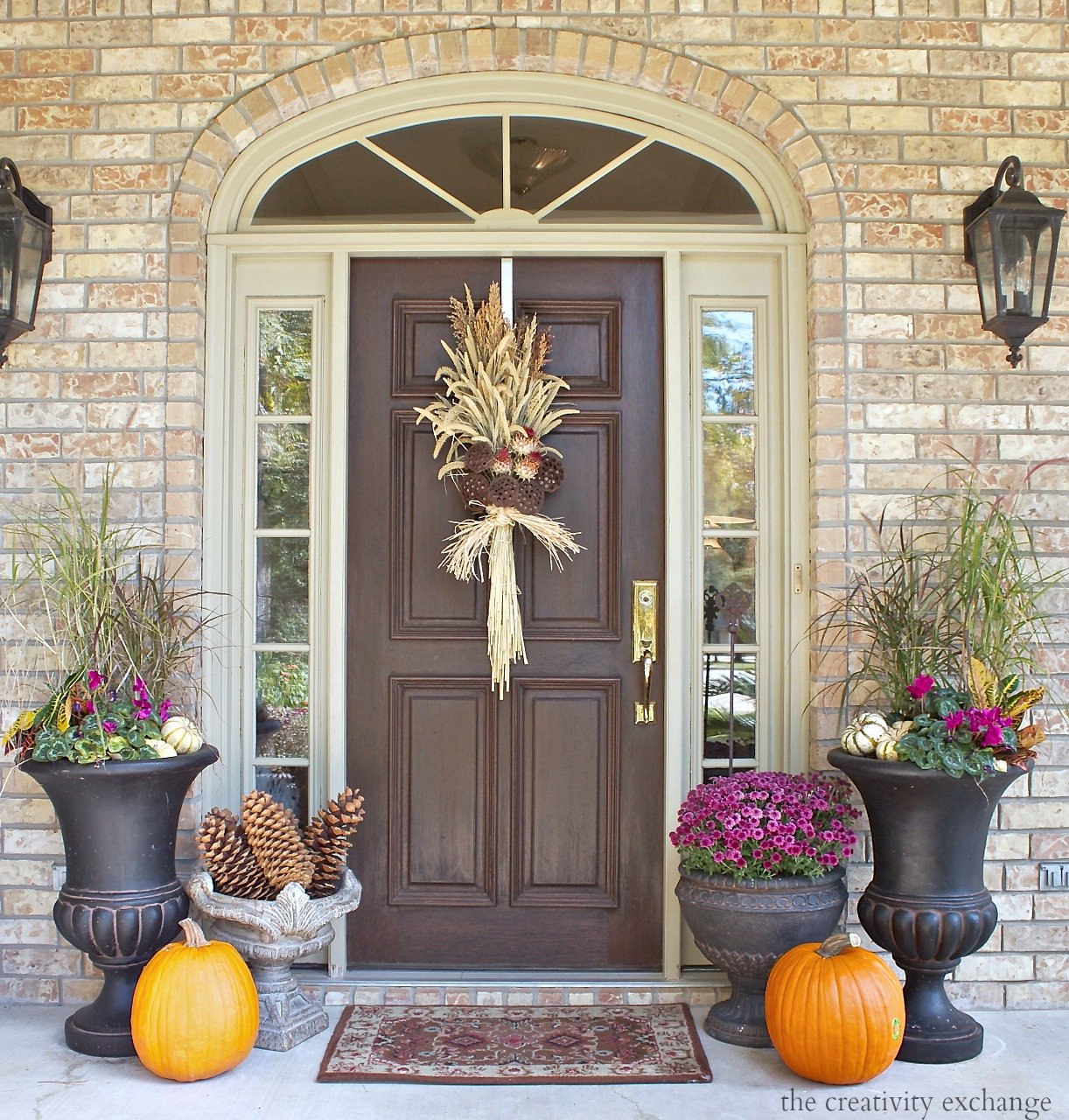 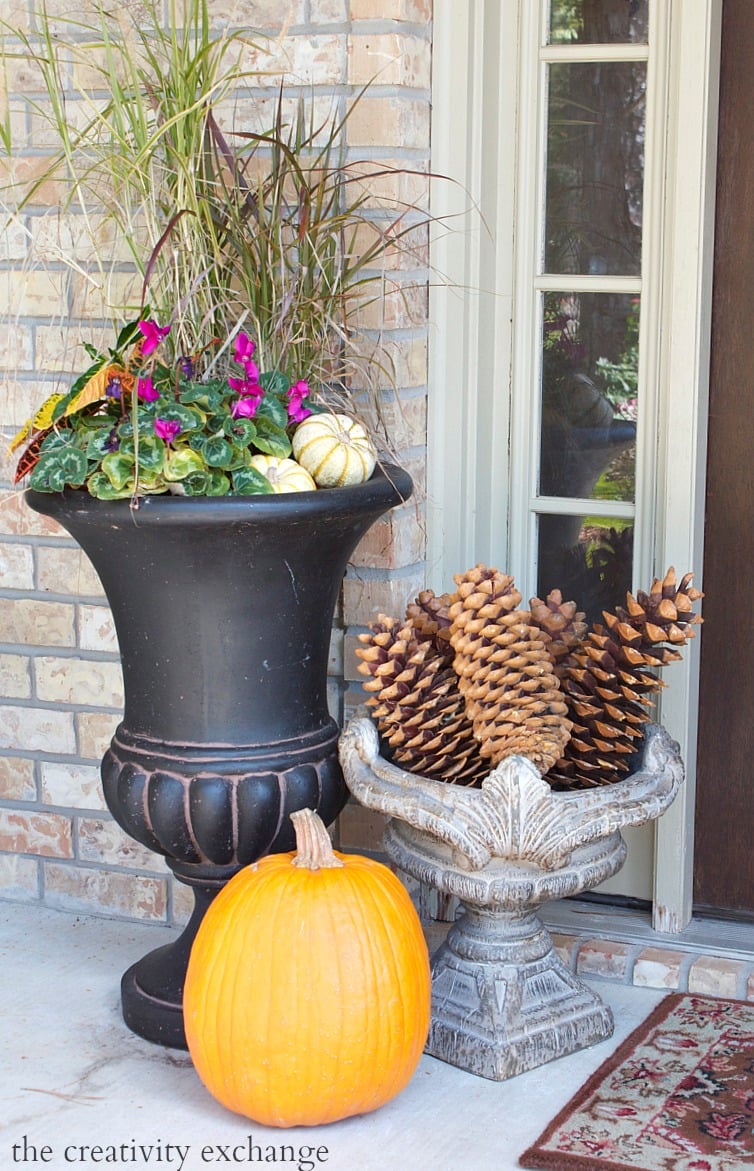 Mixing up smaller seasonal plants each season in my taller urns has worked out well because after a few weeks, everything gets so full and tall.  I also added some smaller pumpkins stacked in the dirt as well.  I love to this in the summer with larger rocks or moss balls.  It’s a great way to fill spots and just add something different: 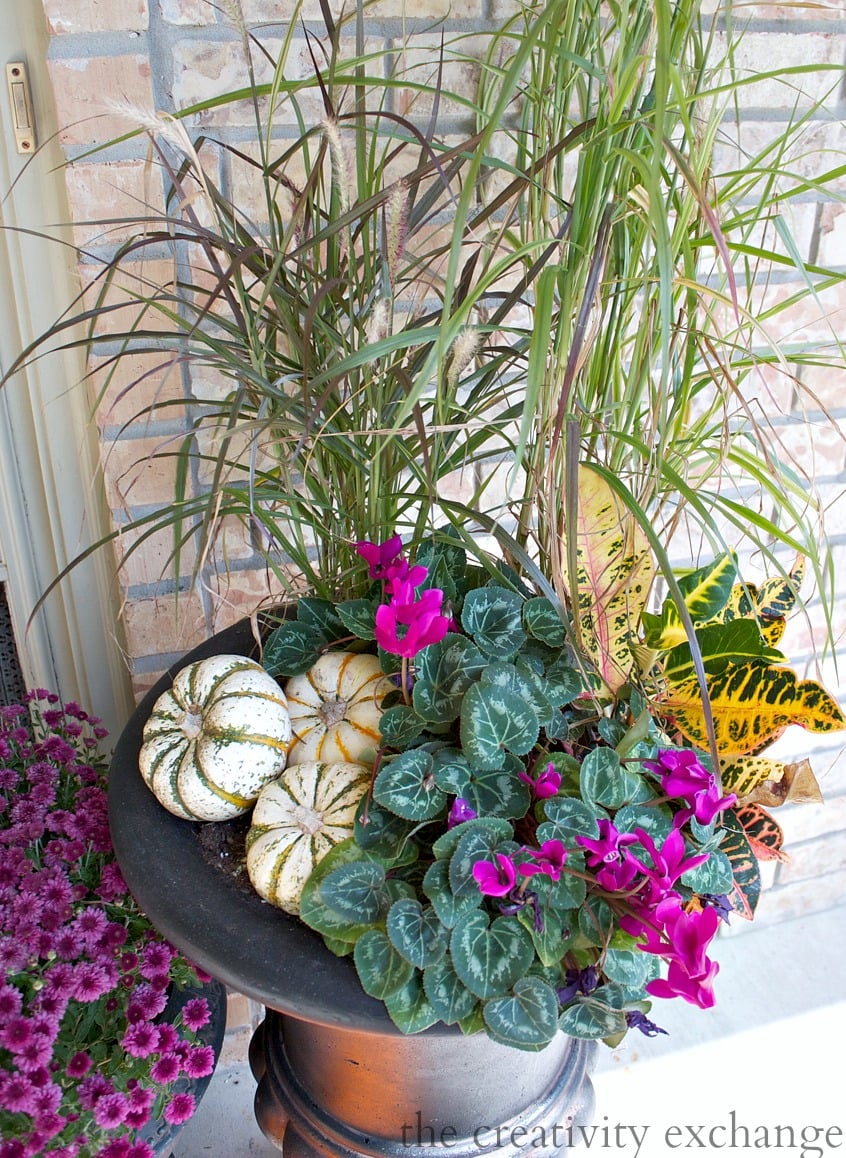 I was really inspired this year by all of the dried naturals at my local Hobby Lobby.  For some reason, there was a lot more than usual and I just kept grabbing things and pulling them together.  It also helped that the naturals were 50% off last week as well!  So I made this easy gathered wreath/swag. 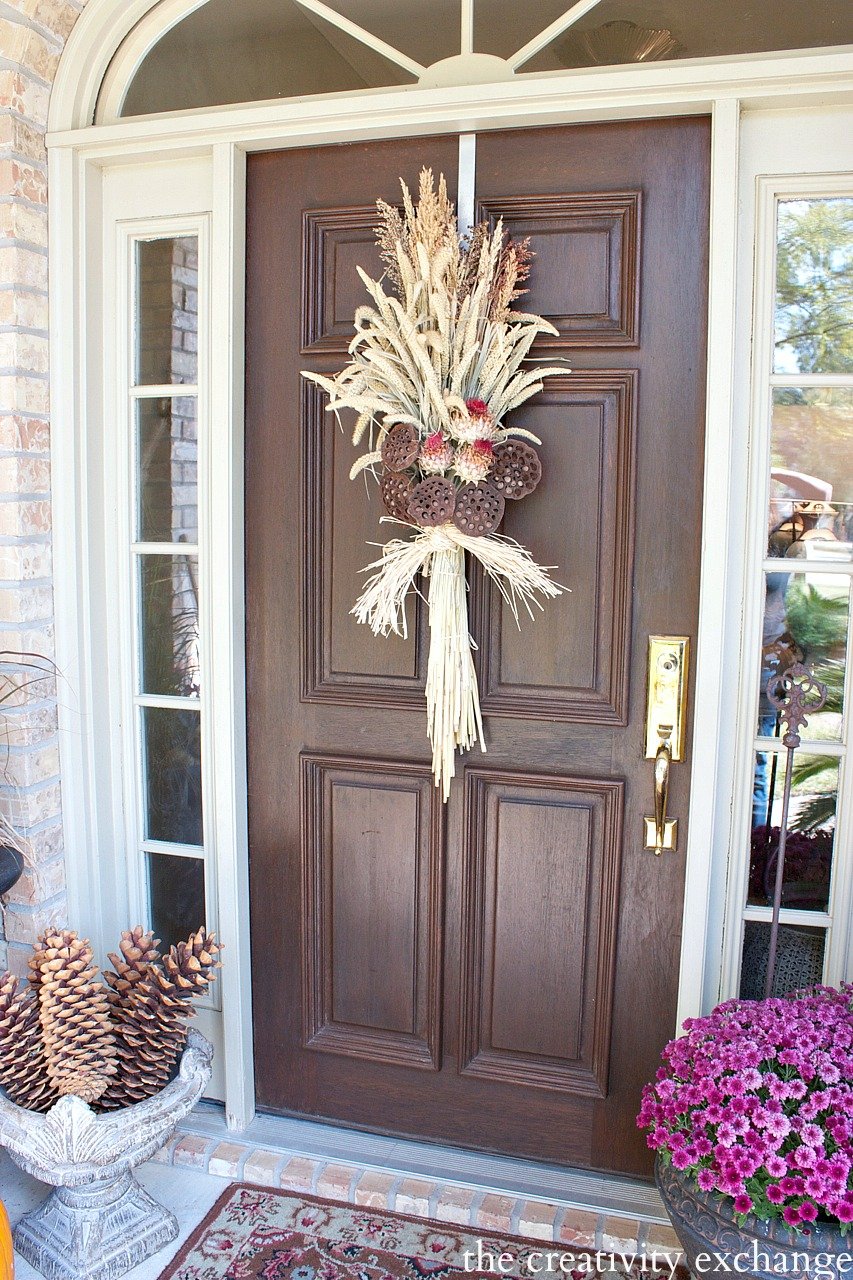 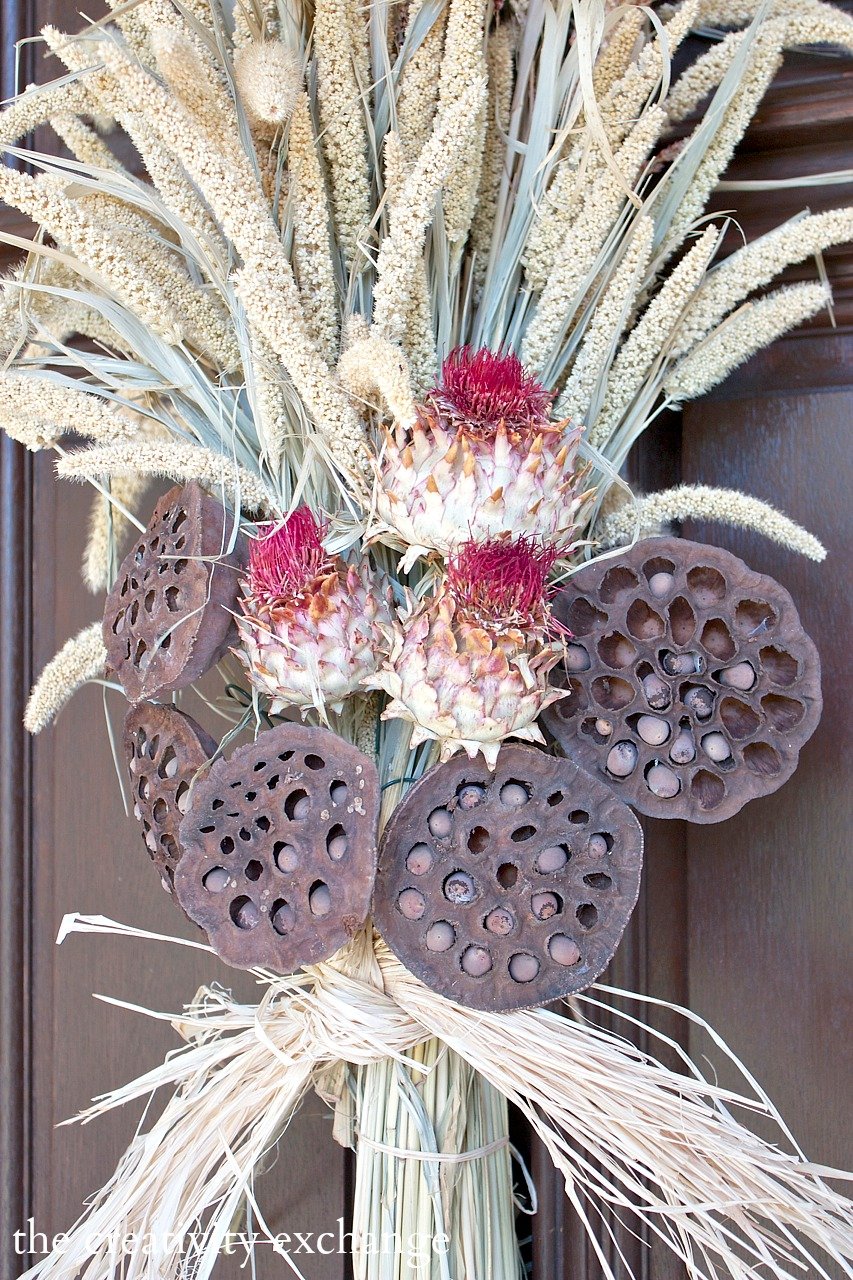 But before I jump into the details for making the swag wreath, I wanted to tell you guys about these massive pine cones that I found in Houston last week.  They are sugar pine cones from the Sugar Pines in the Lake Tahoe area and they all are about 16″ tall: 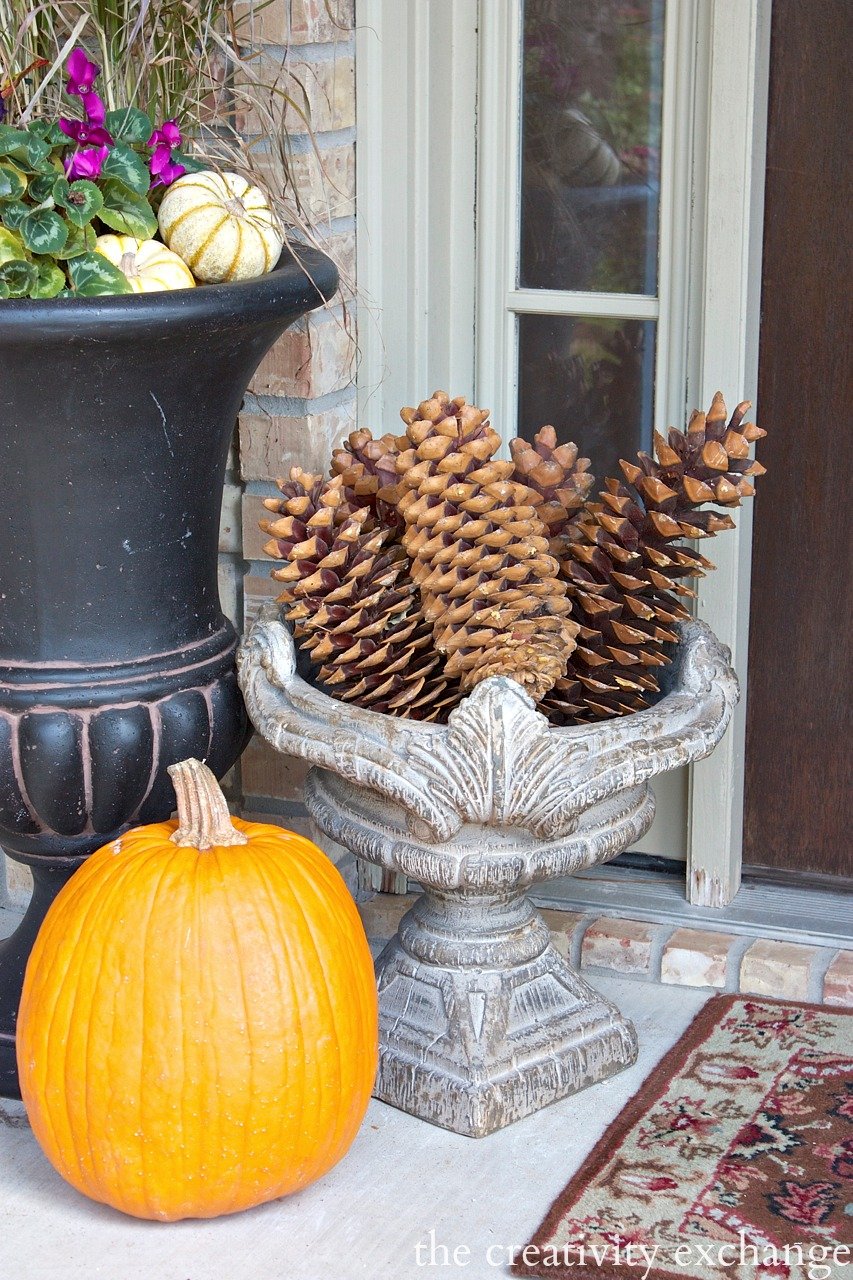 I have never seen pine cones this big and I was so excited to get some so that I could work them into my garlands for Christmas. I decided to just put them on the porch in an urn for fall because they are so amazing and perfect for fall decorating too.

Just to give you an idea, this is how big they are: 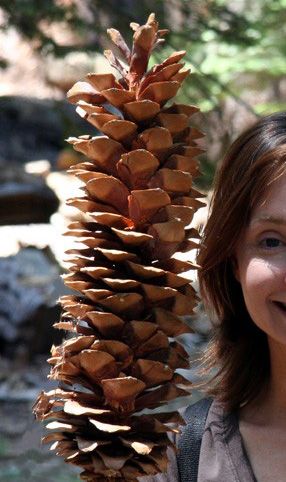 I searched online and found that they are for sale here at Save On Crafts if you would like to order some for yourself. I can’t believe I have never seen them before and wanted to be sure and tell you guys about them.  I can’t wait to see these in my Christmas garland!

Ok, so on to the swag wreath…  It’s really as simple as it looks. 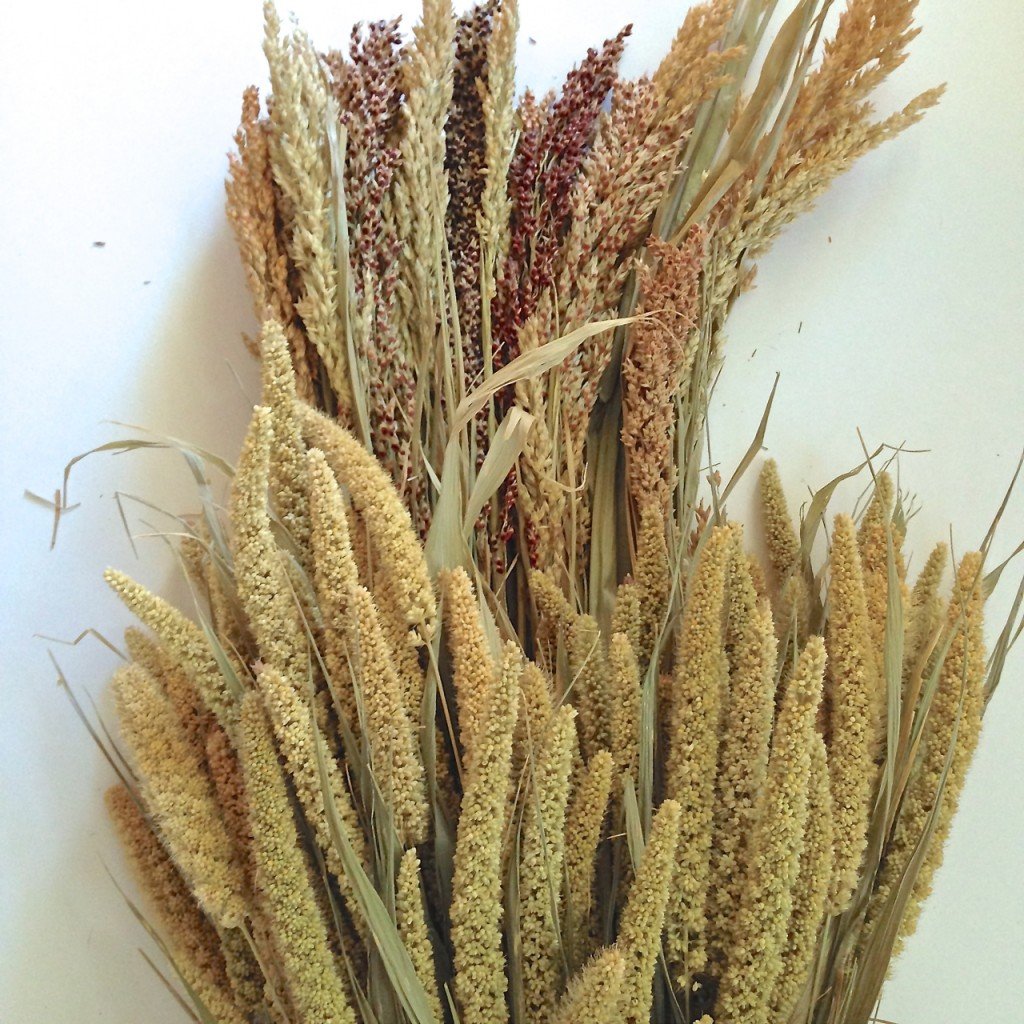 I also picked up two packages of the lotus pods.  Later, I ran across these awesome dried South African Cynara flowers (the red/maroon flowers) and I picked up three of them to slide in as well: 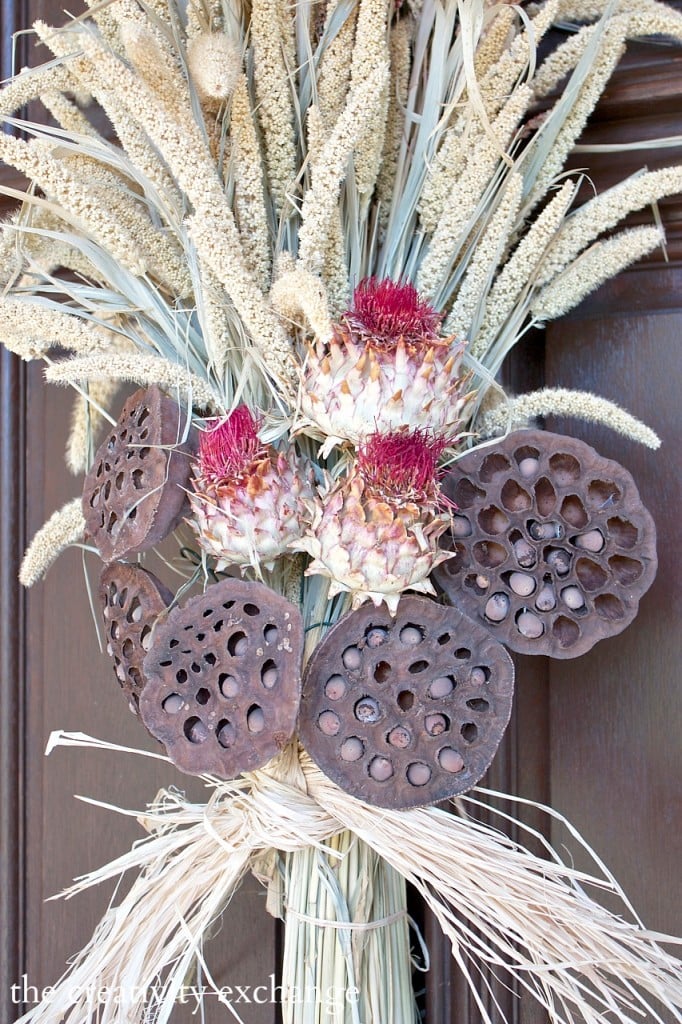 To pull my swag together, I pulled together two separate bundles of equal amounts (staggered and in place) and then I zipped tied each bundle.  I did this to make the swag fuller and not pulled so tightly together as it would with one bundle: 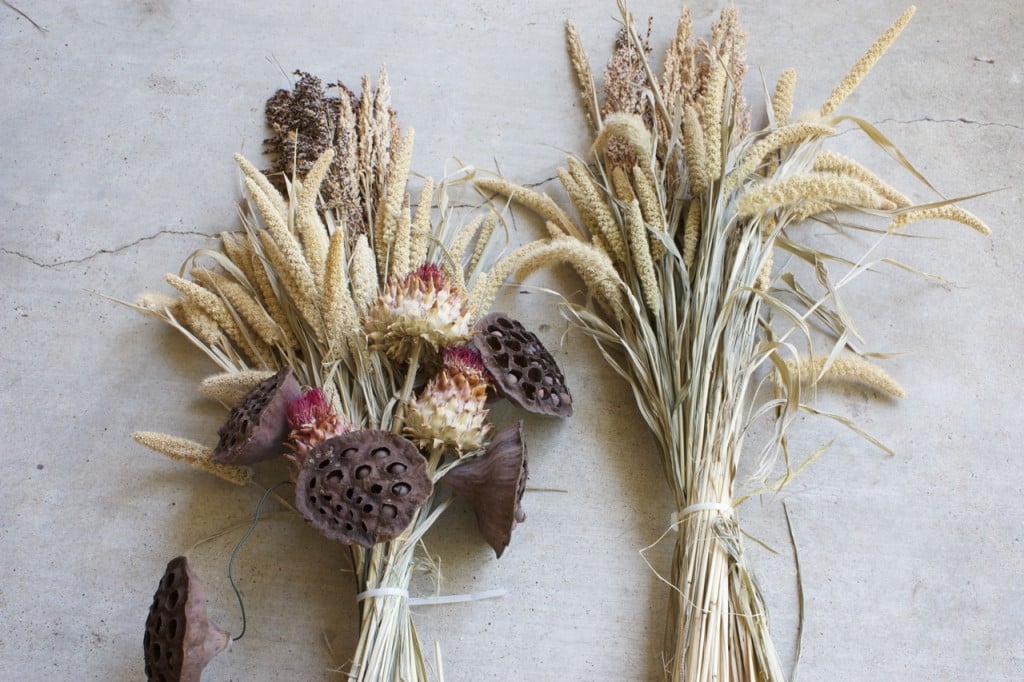 I then slightly criss-crossed the two bundles and adjusted until it was full and exactly the way I wanted it and then I used a zip-tie on the whole bundle (the final adjustment can be made when it’s on the door).  I tied a knot with thick twine mid-way down around about 6 of the stems in the back and then ran the slack the distance to my wreath holder and tied a knot on the wreath holder where I wanted the wreath to hang (I’m sure there is an easier way!).

Lastly, once I got the swag on the door, I tied a bundle of raffia (right over left, left over right knot) over my zip ties.  I also then readjusted the swag and tied narrow pieces of raffia at the base to keep the ends from spreading out.

This wreath took me just about 30 minutes to make and it was so inexpensive because the naturals were all on sale.  I just loved how it turned out and it’s just something a little different and natural. Any dried naturals would work.

I have shared several easy fall wreaths over the years and if you are interested in checking those out, here they are: 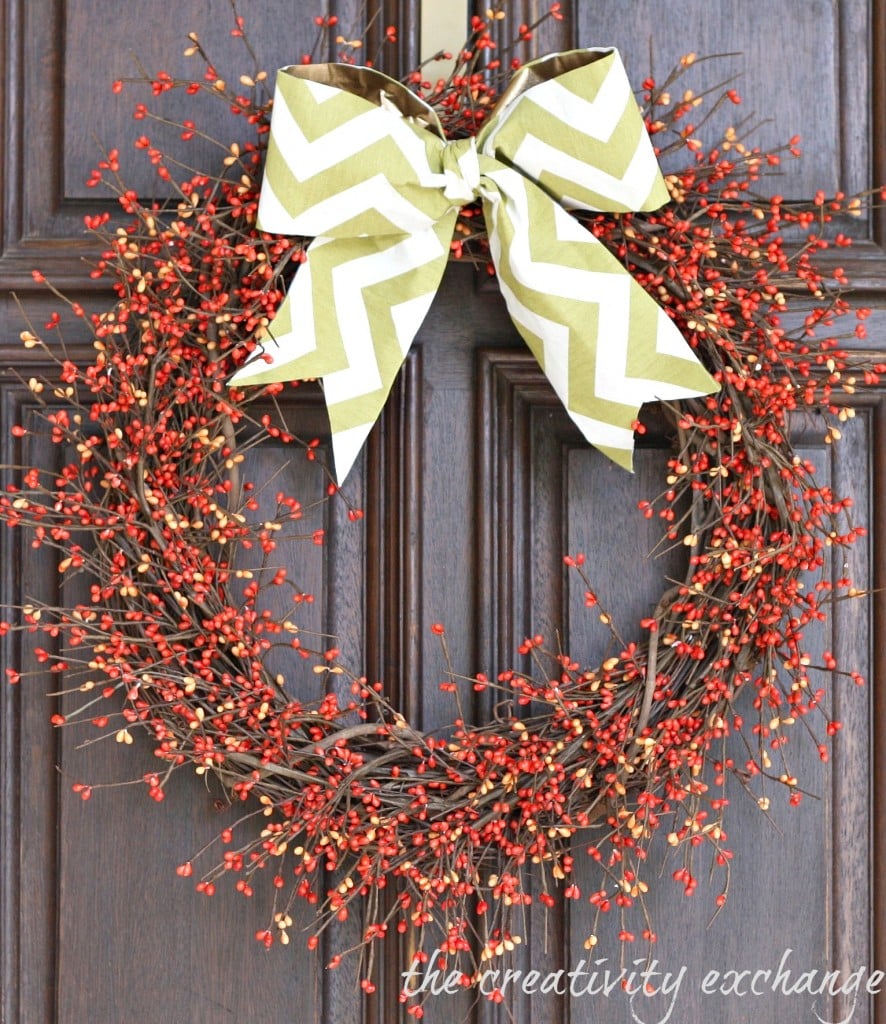 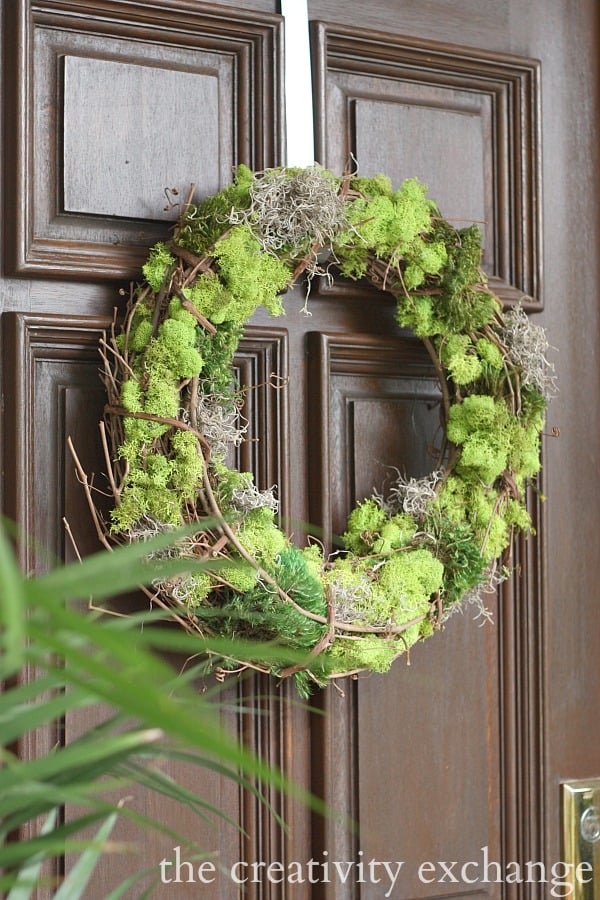 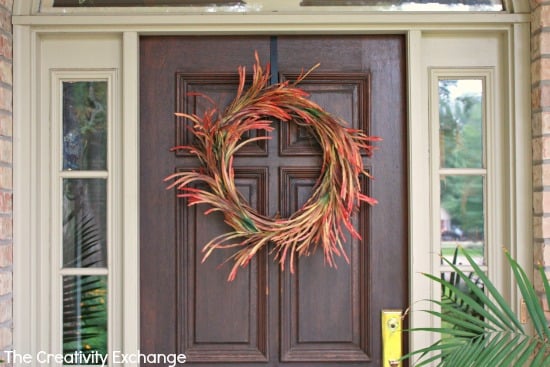 Happy Fall friends and thanks so much for stopping by!