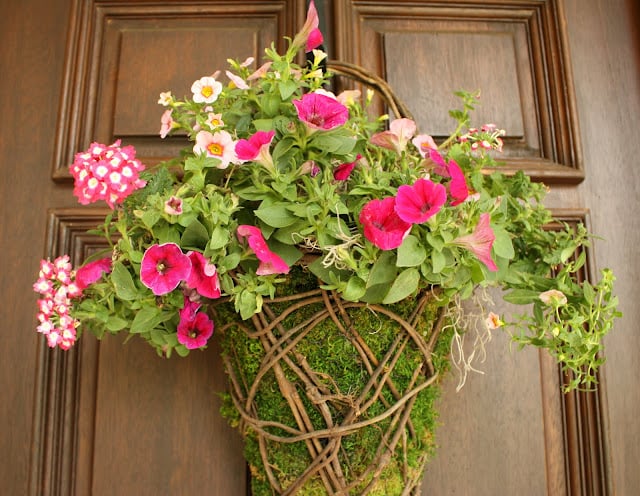 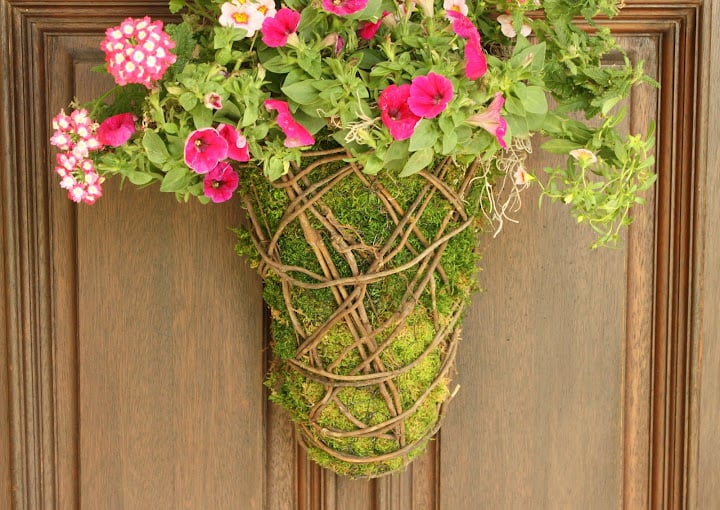 I hope you all had a wonderful Easter!  We had a great weekend with friends and family and we also spent a lot of time working on our yard, porch and flower beds.  I hate to say it, but I’m not much of a huge fan of gardening. Although, I do love the end results of a beautiful yard and flower beds,  I just don’t have a green thumb and it takes a lot of time and patience, both of which I have none of!  I’m more of an instant gratification girl and I’d rather have a glue gun in my hand than flower seeds.

Over the last few years, I have made an easy moss basket in the Spring for my front door to keep up through late fall/Christmas, as alternative to having seasonal wreaths throughout the year. I don’t have the time (or interest) to make and switch out wreaths, so this basket is an easy way for us to have something pretty on our door without much effort.

In the past, I would usually just fill the moss basket as full as I could with dried stems like wheat, lavender or dried hydrangea’s and I have just loved it!.  The best part is that it literally took me 20 minutes to make.   This year, I wanted to see if it would work to use real plants/flowers in my basket and I it worked perfectly and I just love how pretty it turned out: 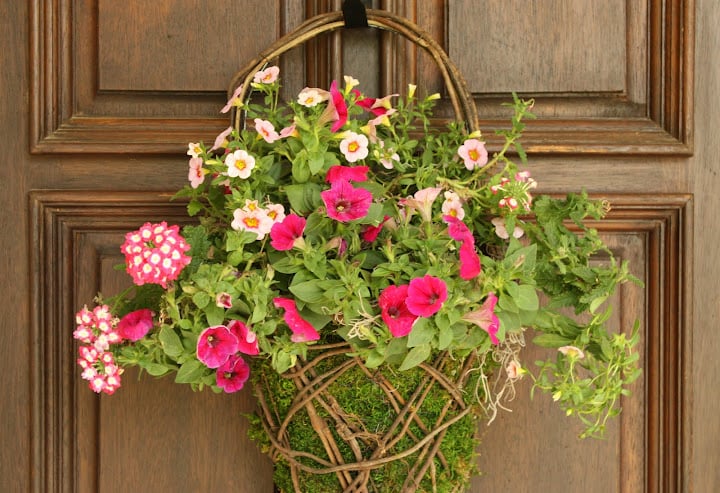 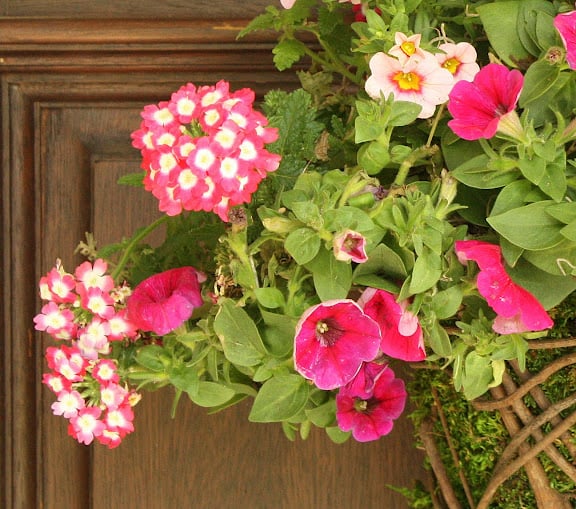 Again, this moss basket could be used in many different ways either with dried stems or with fresh flowers. These wire grapevine baskets are sold at most craft stores usually in the grapevine/ dried floral section: 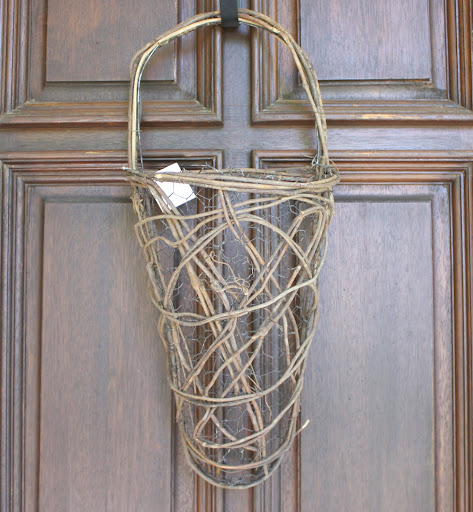 To cover the inside with moss, I had to use to a bag and half of the Super Moss (Preserved Sheet Moss) that I also purchased in the dried floral section: 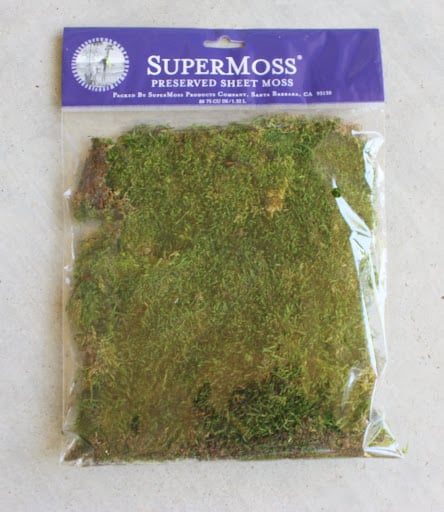 I began by sliding the green moss in the basket and pulling apart any section that was not facing outward. In other words, save your pretty green moss for only the areas that you will see from the front (the picture below is the backside of the green moss which is yellow): 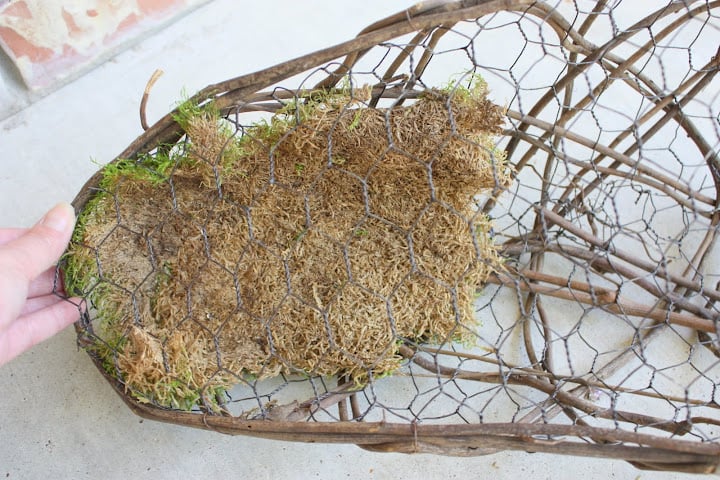 On the backside of the green moss, you can stuff pretty much anything that you have like floral foam, Spanish moss or anything organic. I used some old moss that had turned yellow from a previous project. The idea is to stuff it so full/tight of whatever you have that will push the pretty green moss into the wire front and secure it in place: 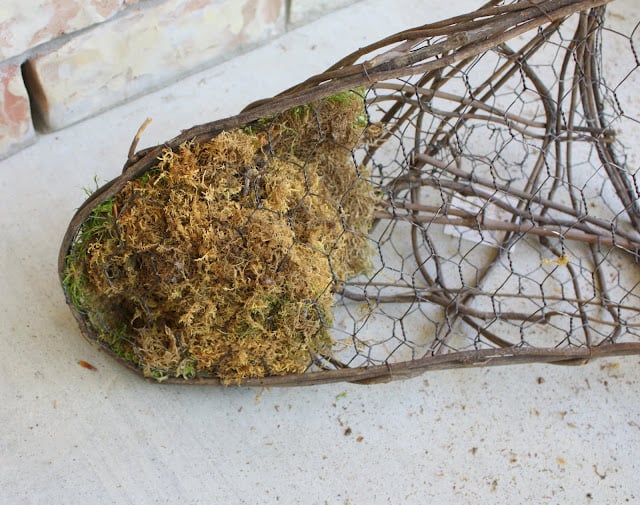 About half way up the inside of the basket, I began stuffing the basket with spanish moss and tearing the pretty green moss to completely cover the part that you see from the front of the basket: 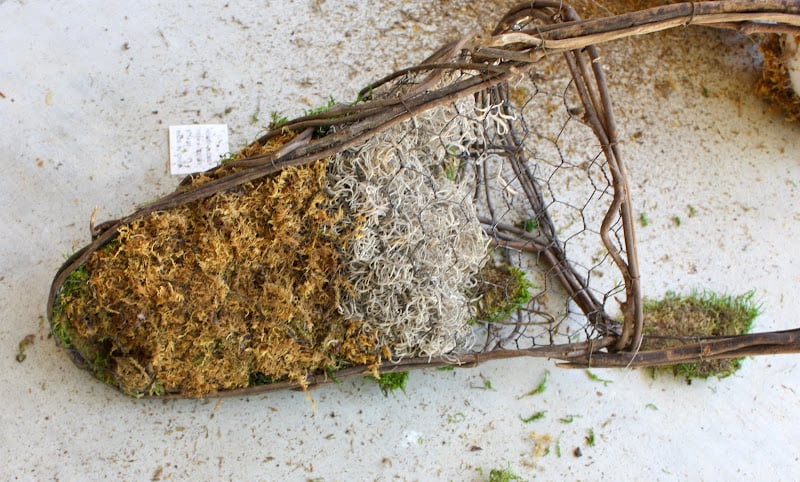 The last third of the way, I divided a pot of flowers that I purchased from Lowe’s in half. I used a knife to cut the dirt and separated the stems at the top carefully: 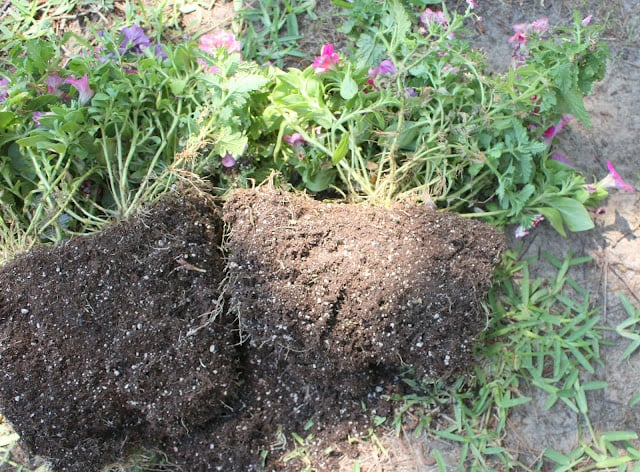 I then inserted half of the flowers into the last top third of my basket: 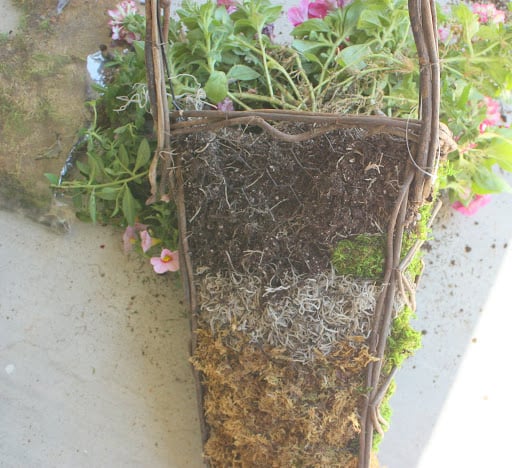 I then covered the top dirt with a small amount of spanish moss that will help retain moisture in my basket.  After I took this picture above for you to see the three layers, I stuffed additional Spanish moss behind the dirt to also help retain the water and keep the dirt from falling out the back.  When I lightly water the basket, I remove from the door and rest on the porch for a few minutes just in case any of the water leaks out.

I couldn’t believe how light the basket turned out to be with all of my stuffing.  My neighbor Jane had a brilliant idea and suggested skipping the last step and rather than dividing a plant, simply insert two smaller plastic pots of flowers in their containers in the top part of the basket and top with Spanish moss.  This way you can just remove the containers to water and you can switch out flowers for the different seasons.  Either way, both work and I have watered my basket lightly every other day and the flowers look spectacular and have really grown in the last week.  I may have to periodically trim back because it is doing so well:

I have several projects that I have completed this week that I plan on sharing next week. I also have a new feature starting next Friday that I think you guys will like.

Have a fantastic weekend friends!!