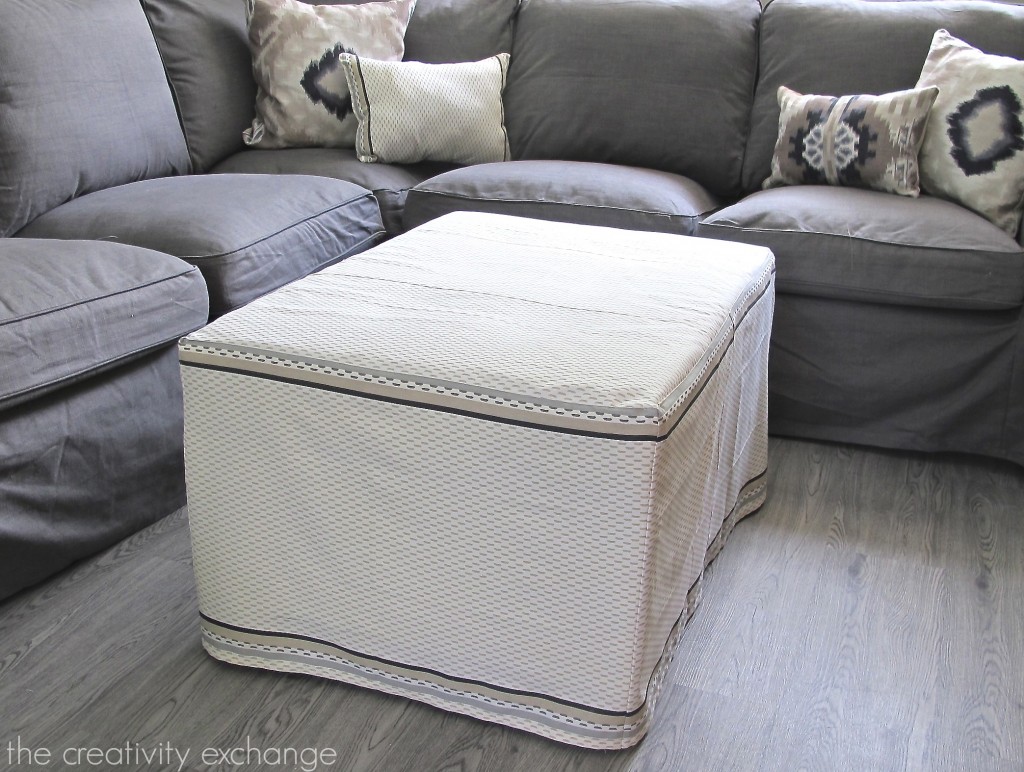 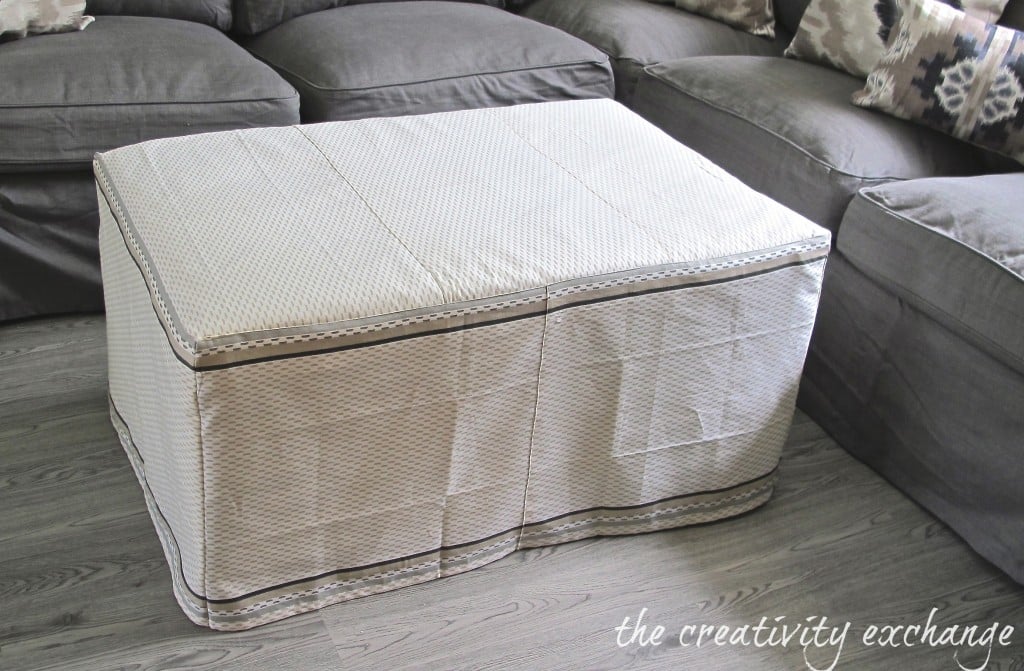 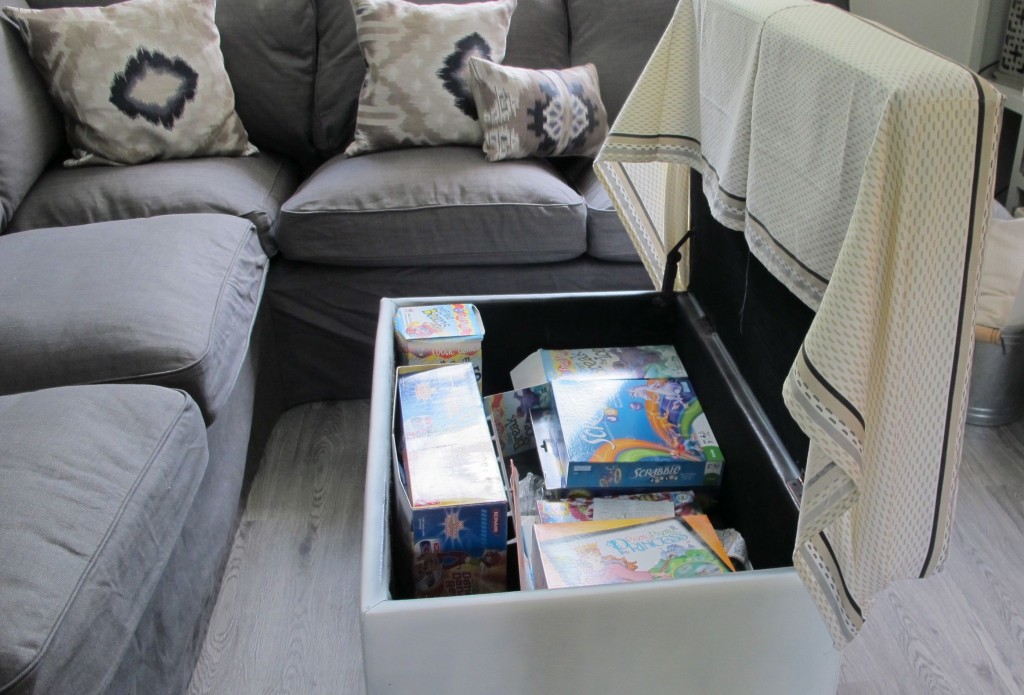 My office/craft room revamp is finally finished! I was starting to wonder if I would ever be able to say those words.  My daughter and I are creating the art work for the walls this weekend and the space is being photographed (hopefully on Monday) for the complete final room shots.  So if all goes as planned, I should be sharing the reveal next week (fingers crossed).

Have you ever had a project that everything you touch or have planned doesn’t work out? Well this project has been THAT kind of project for me. We seriously have had one project fail right after another with the whole revamp (smiling as I grit my teeth). The good news is that I hate project fails more than anything and I absolutely refuse to let fails discourage me because I always keep in mind that the majority of my best projects have evolved from a project fail.

As you will be seeing over the next few weeks, all of the project fails in this space resulted in far better end results then what I had initially intended (happy crafty dance!).  I want to share our challenges, fails and recoveries with you because I really want to show you why it’s so important to never give up when a project doesn’t go as planned and you “think” it’s failed.

So on that note, let’s jump into one of my first fails in my office revamp, my ottoman fiasco…

So I had this large brown vinyl/leather storage ottoman in our playroom when we started this project: 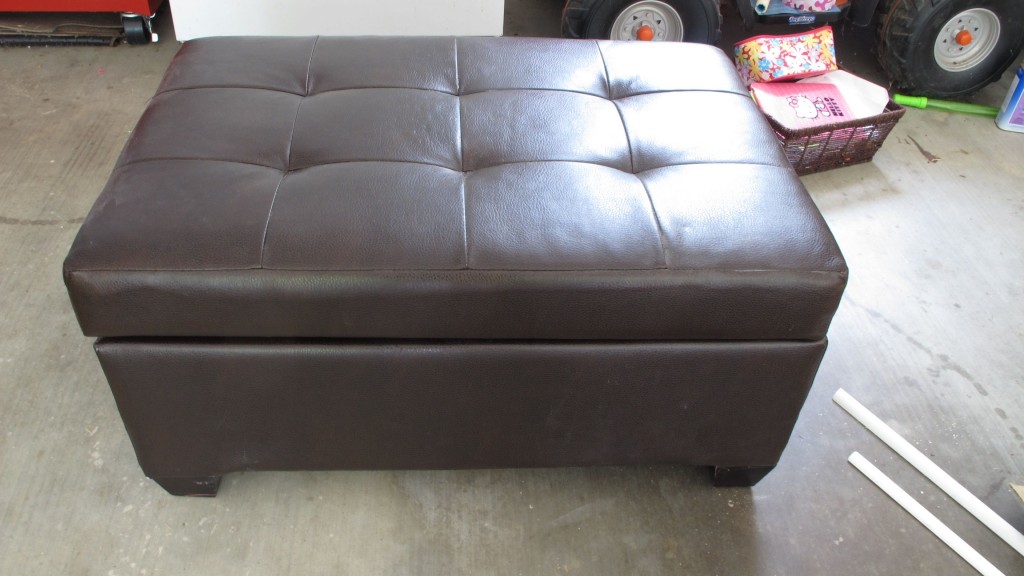 You’ve probably seen this large ottoman at Ross or Marshalls and it also opens for tons of storage.  It’s a great piece and was dirt cheap (I think I paid $49.00).

My plan was to spray paint it with Dupli-Color Vinyl/Fabric Spray Paint in white (to match my white leather office chairs).  I had done my research and talk to the guys at the auto store where I picked up the paint and they told me they have heard nothing but great things about the product.  It’s really made to spray vinyl car seats and other upholstered areas in a car.

So like a good little DIY’er, I did my prep work, washed down the piece with just warm water and let it dry.  I  then sprayed it and it covered BEAUTIFULLY and I was so excited. I was more than impressed and it felt just like the smooth vinyl and you could not tell that it had been painted just like the guys said it would.  It looked absolutely amazing: 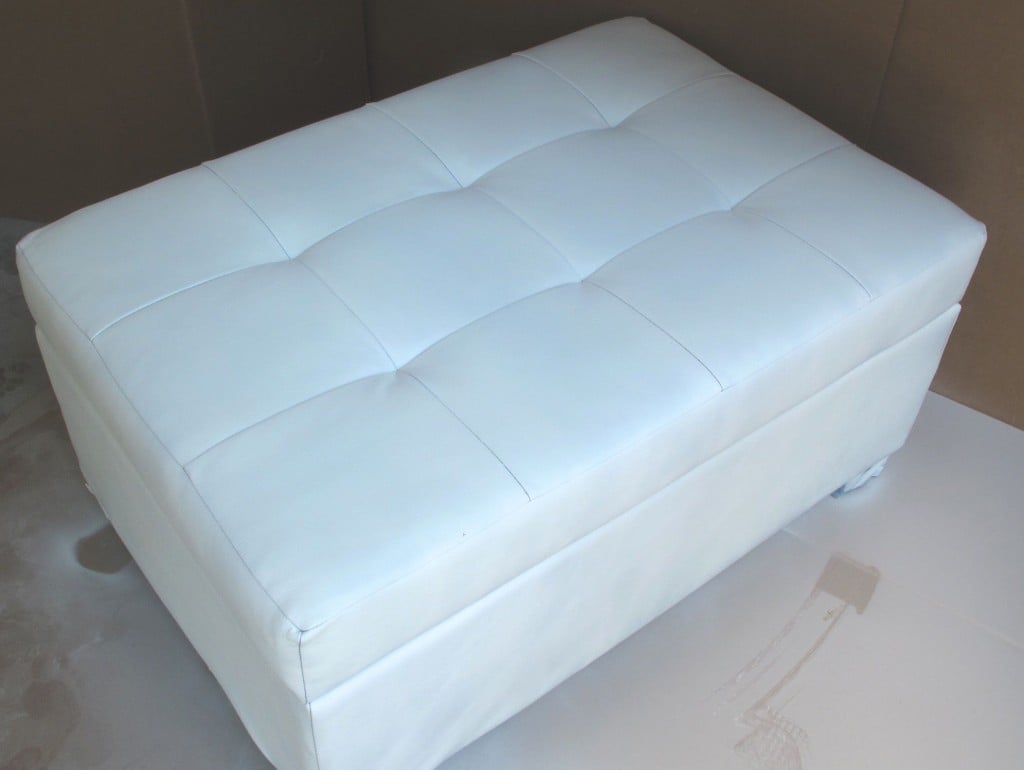 I wanted the white leather/vinyl for my craft room because clean up would be so easy with mineral spirits or worse case, I could easily touch up with vinyl paint (unlike fabrics).

We placed the ottoman in the new space and it just looked spectacular and really added a modern touch. So I checked that project off my list.. BUT then.., two days later, I looked down to adore my new modern ottoman and all I could see were cracks.  Cracks all the way down to the brown and it felt like cement: 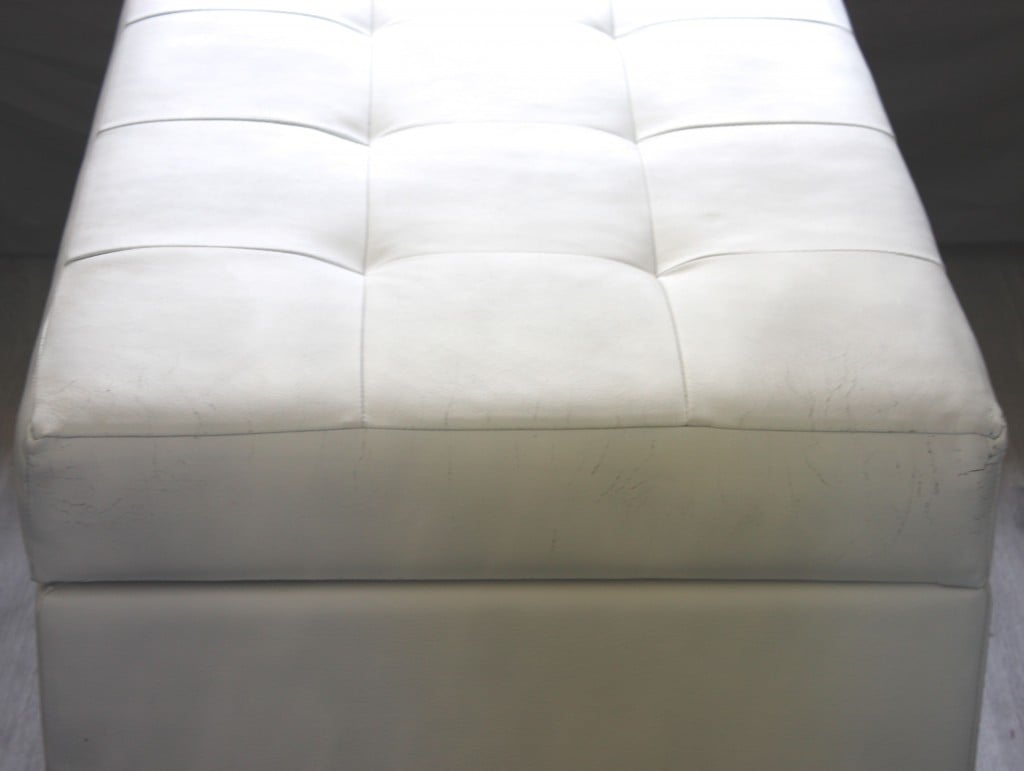 Ugh!! What the heck??? Cracking? NOOOOOO……..   I’m pretty sure I shed a tear while hugging my pretty white ottoman as it cracked in my hands.  I don’t know why that stupid vinyl paint didn’t work but I made a mental note that vinyl/fabric spray paint does not work (lesson learned) and quickly went into recovery mode.

In my tragic cracking moment, I remembered a gorgeous ottoman slipcover that I kept thinking about that I had planned on doing for our living room that I found on Pinterest: 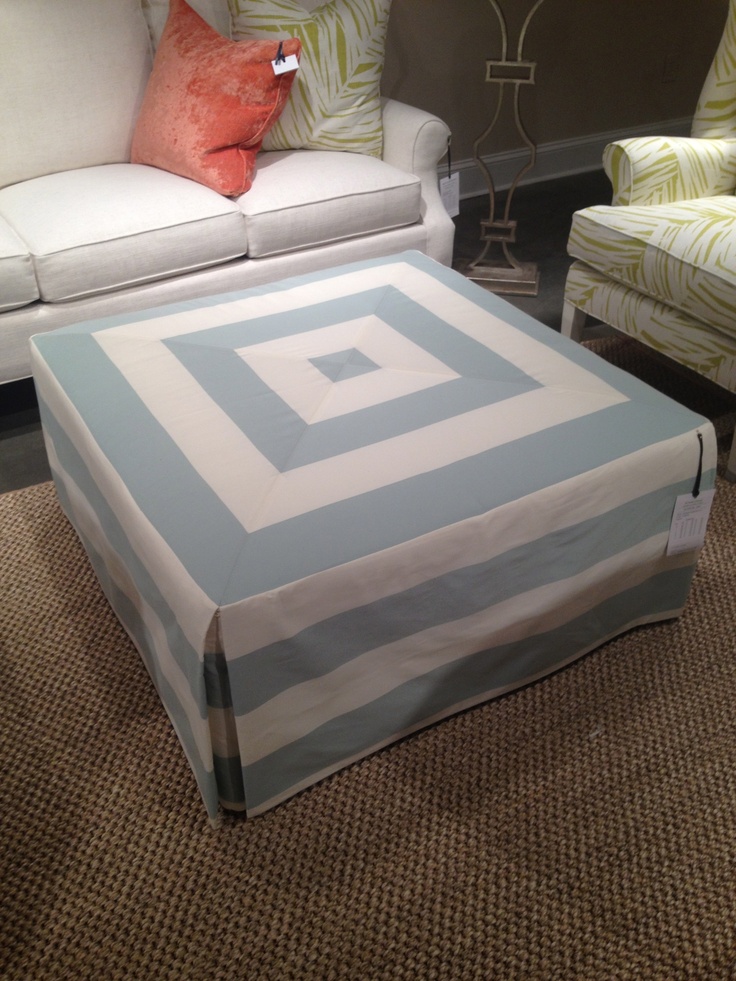 (I cannot find the source of this image.  If you know, please let me know so I can share it here)

This slipcover is so beautiful and I knew that I really needed a square ottoman to do this exact technique but I was thinking I could do something similar.  I had purchased multiple sets of these heavy duty dish towels made by Threshold for Target because I was so obsessed with the fabric and I was going to make pillows with them.   What could be more durable (and highly washable) in a craft room than dish towels?

I could see in my head as I pulled them out that the stripes on the side of the towels would look like trim if I turned them on the side: 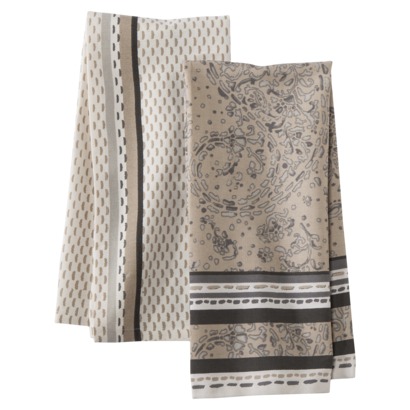 I held up the dish towel (length wise) and it was the same height of to where my seam would be for a slipcover. I could instantly see that the lines of the towel would make it look perfectly positioned trim/stripes: 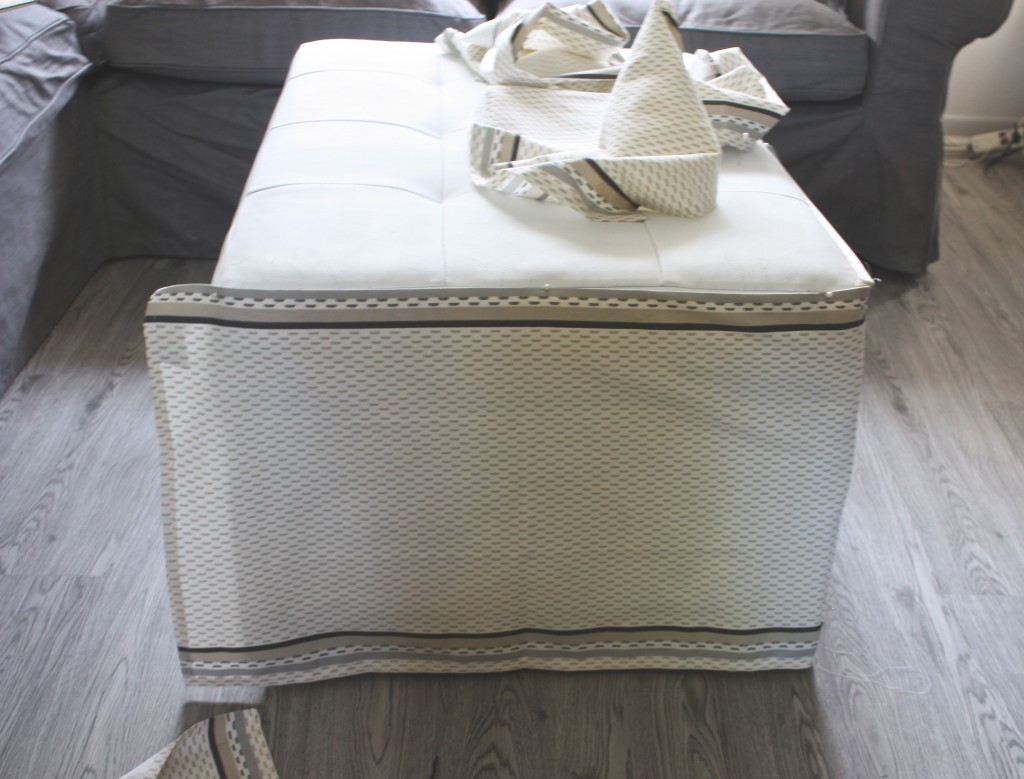 I pinned the dish towel to the ottoman just to be sure, and all I need to do was fold/iron over an inch at the top and it was a perfect fit! No need to hem the bottom and all I had to do was stitch the four corners and stitch the top!

So to get started, I pinned each dish cloth to the seam at the top of the ottoman.  This is why this is so easy to make an ottoman slipcover because the seam around the edge of an ottoman is precisely where the seam needs to be for a slip cover: 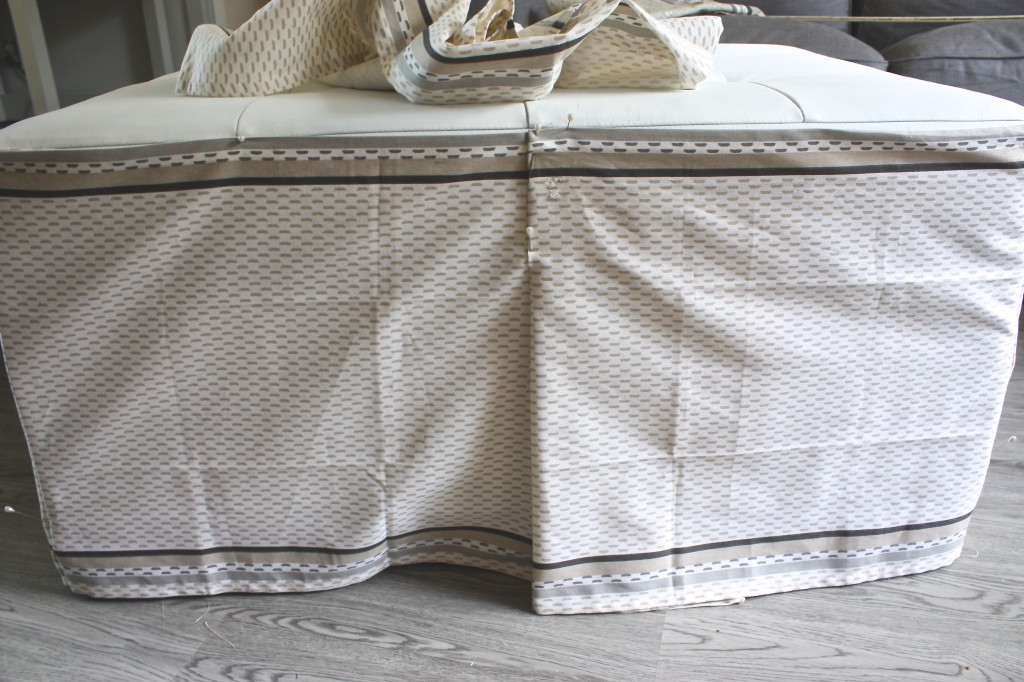 I then pinned where my side seams needed to be on the two long sides (I had to have a seam in the middle) and stitched them together (one towel perfectly fit the shorter width of my rectangular ottoman with a couple inches left over to stitch to the long side panels): 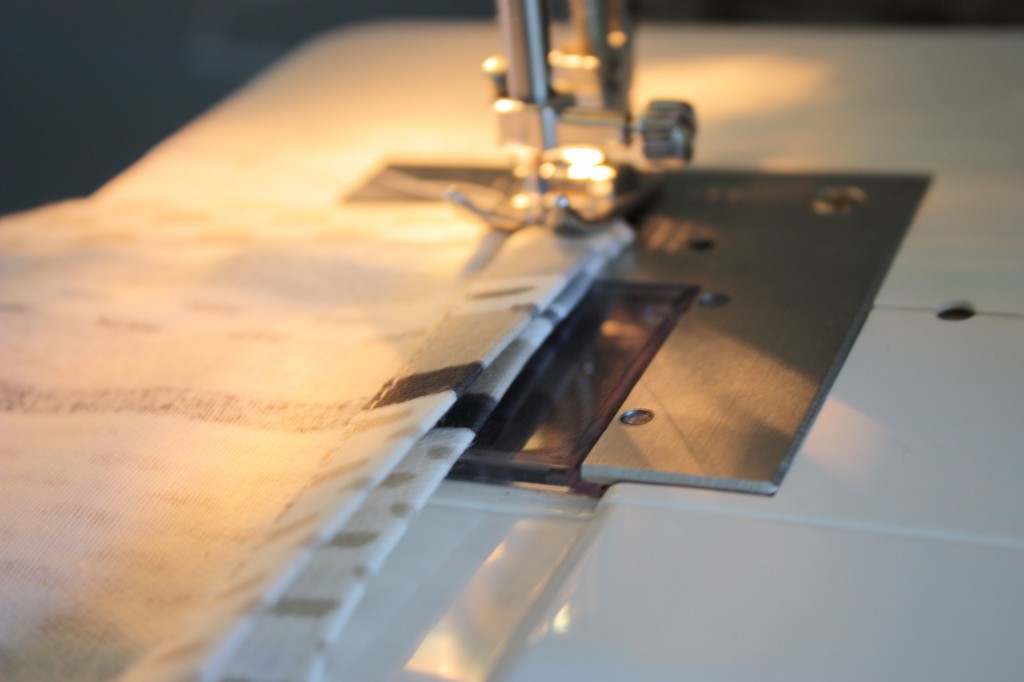 I did this all the way around pinning each side and stitching one side at a time and re-pinning to the ottoman just to make sure my measurements were precise. Once I attached all of my side panels, I pinned it back on to the ottoman to begin working on my top piece: 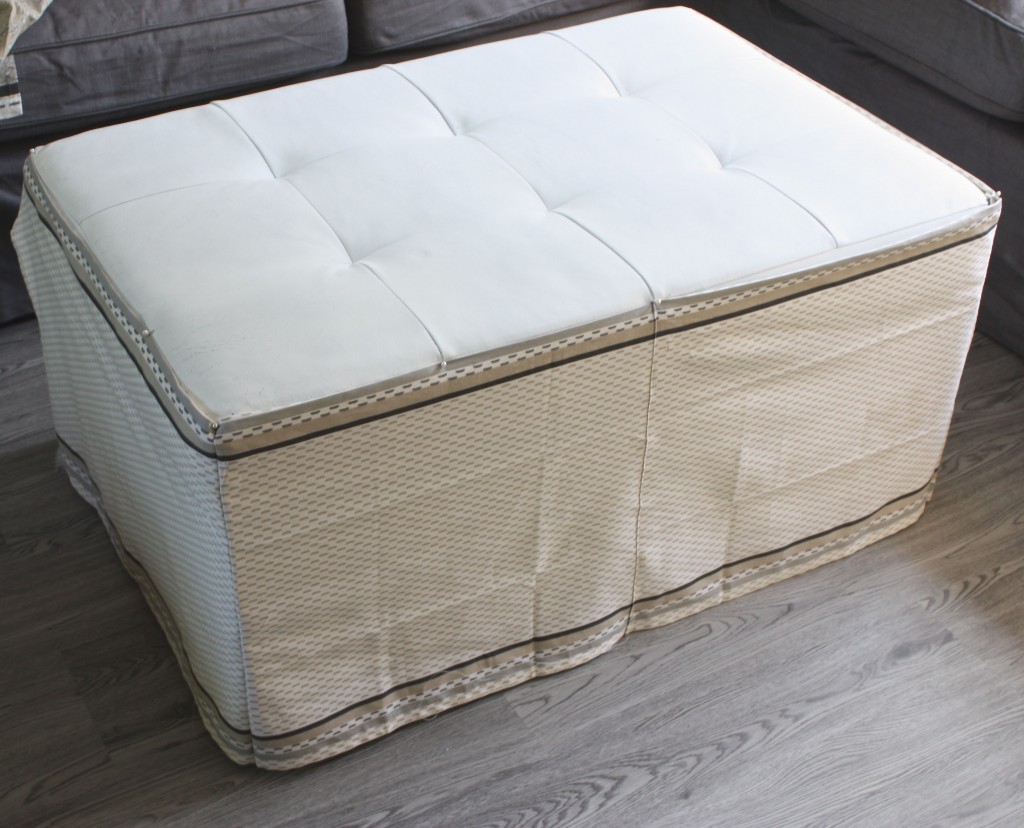 For my top panel, I cut the lines off of three tea towels and laid them to a top panel of black out drapery backing that I had measured and cut to fit on the top (I left an inch all the way around to stitch my side panels to the top).  The reason I used heavy duty black out fabric is that I wanted to hide the stitches/indentation on the top of the ottoman.  T he rubber like backing on the drapery backing would keep the slipcover from sliding off: 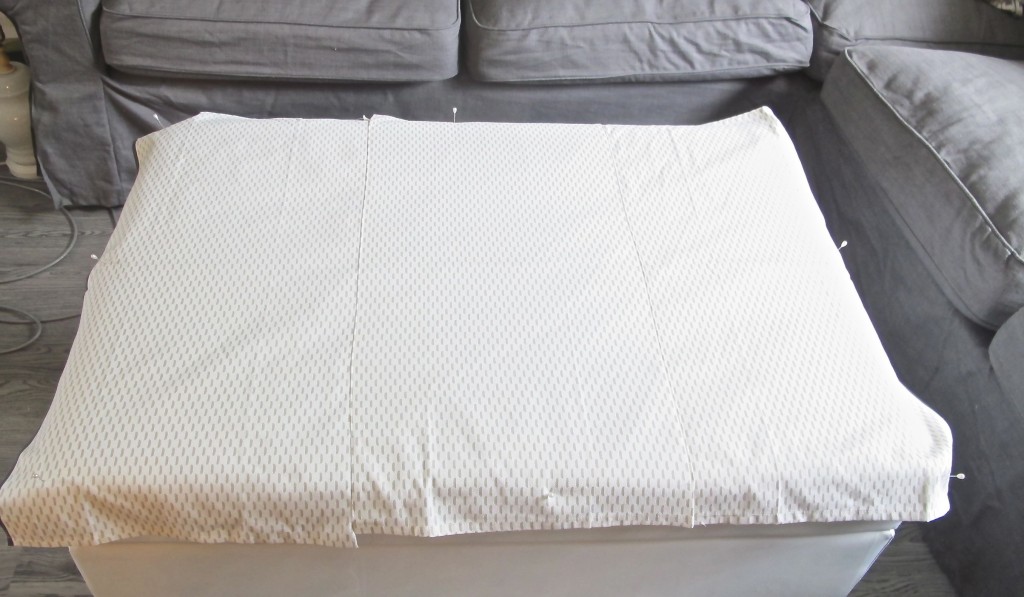 I pinned through my top fabric, drapery backing down to the seam of the ottoman all the way around.  I then pinned the first side pane right at my pins and stitch one panel at a time just to 100% certain that the corners would line up:

I would pin and stitch one side at a time and then go back and pin and stitch the next side.  This ensured that I everything would fall in the right place.  I stopped short of stitching the corners because I wanted to hand sew them at the very end just to be extra careful: 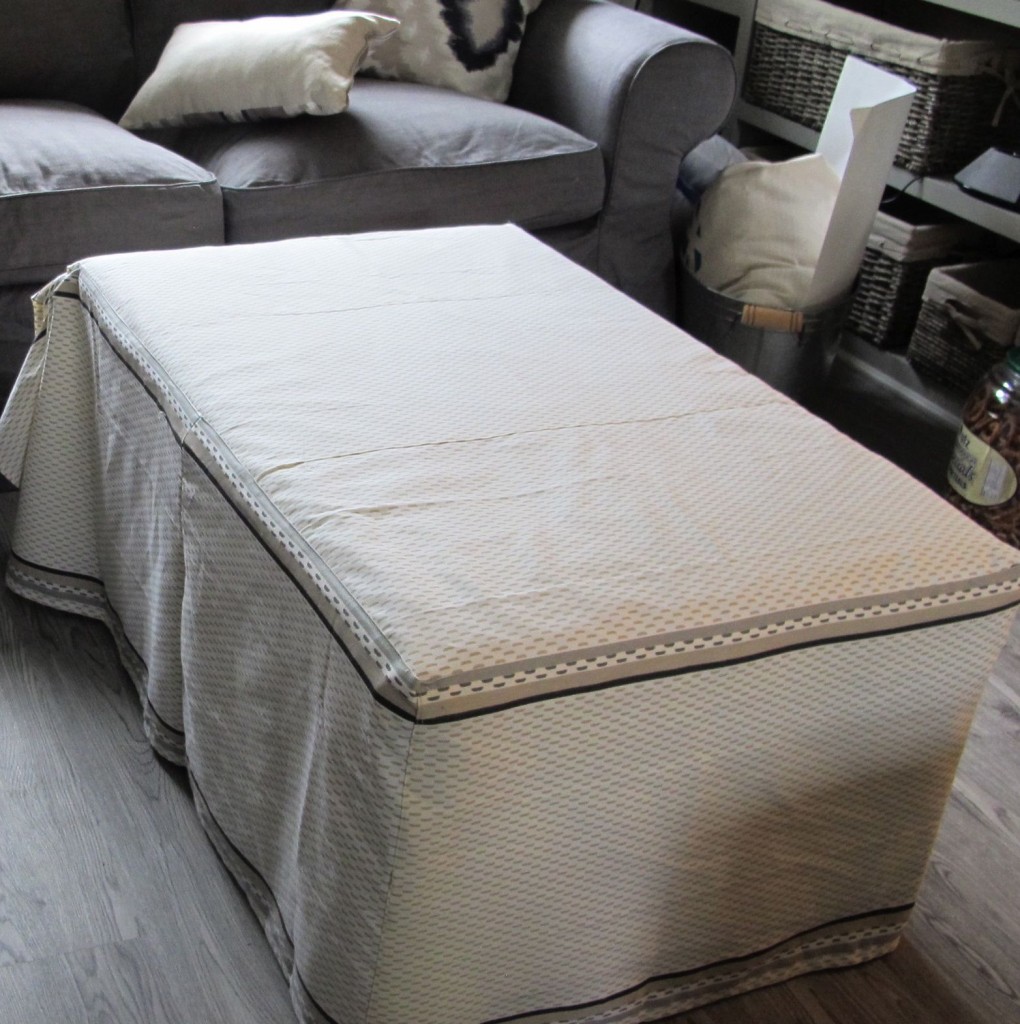 Once I had everything done except the corners, I hand sewed a couple stitches on each corner so the corners would have a nice clean stitch.  I did not trust my limited sewing skills to running the corners through the sewing machine.  I also wanted to tighten up the top part of the slipcover so that we could open and close the ottoman to get to the storage:

I couldn’t be more thrilled with how this pitiful project fail turned into such a beautiful slipcover with a fabric that I just love! I love it far more than the white modern look and it was really easy and quick to do since I used the tea towels. Because my ottoman is so large and is a rectangle, I had to use 9 tea towels. If you have a smaller square ottoman, it would only take 6!

So what do you think?  Do you have an ottoman that could use a pretty new slipcover? I’m pretty excited because this fabric is extra durable and of course washable.  Finally, something really checked off my list.

Unfortunately (or fortunately), stay tuned for more project fail fun (smiling as I grit my teeth).